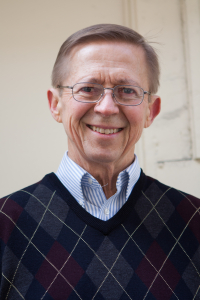 On April 23, 2017, the Northshore Concert Band continues its 61st season with Giving Voice to the Silenced. This powerful musical program features two works by acclaimed American composer David Maslanka; California and A Child’s Garden of Dreams.

A Child’s Garden of Dreams  was commissioned by and dedicated to Northshore Concert Band founder John P. Paynter and his wife Marietta Paynter and the Northwestern University Symphonic Wind Ensemble. The Northshore Concert Band will perform A Child’s Garden of Dreams at Pick-Staiger Concert Hall at Northwestern University in Evanston where it was first performed 35 years ago.  Mr. Maslanka offers up this description of his work:

“A Child’s Garden of Dreams” came about through a commission from John Paynter of Northwestern University. The music was composed in 1981, and the premiere performance was at Northwestern in 1982. Paynter had asked me to write a piece that was the wind equivalent of Bartok’s “Concerto for Orchestra.” This was a daunting challenge but I said “Sure!” The five movements of “A Child’s Garden” are based on dreams of a young girl who, unknown to her, was at the end of her life. The dreams were presented and discussed by the psychologist, Carl Jung, in his book, “Man and His Symbols.” The dreams are about transition and transformation, a prefiguring of her passing. Jung found it both disturbing and fascinating that such dreams could come through a child. I have long been fascinated by ideas of transformation, in this life, and beyond, and my music is an attempt to capture the central energy of each of the dreams. Sometimes there is graphic illustration as in the third dream where animals grow to an enormous size and devour the girl, and sometimes there is a subtle parallel flow of music and philosophical thought, as in the second dream: “A drunken woman falls into the water and comes out renewed and sober.” What is evoked by both the dreams and the music is a much larger view of life and death than we normally have.”

“California” was written for the the 2016 California All-State Band, and the premiere performance was conducted in San Jose by Mallory Thompson. Music education in California had seen a revival after years of funding cuts, and there was a renewed statewide sense of possibility in public school music teachers. I was asked to write a piece that might reflect some of that new-found energy and purpose. My thinking went deeper to touch some fundamental element of the strength of the California land and its people. The music is quietly and beautifully expressive at the outset, and rises to moments of great intensity before settling once more to a quiet close.”

Born in New Bedford, Massachusetts David Maslanka attended the Oberlin College Conservatory where he studied composition with Joseph Wood. He spent a year at the Mozarteum in Salzburg, Austria, and did masters and doctoral study in composition at Michigan State University where his principal teacher was H. Owen Reed.

Maslanka’s music for winds has become especially well known. Among his more than 130 works are forty pieces for wind ensemble, including seven symphonies, fifteen concertos, a Mass, and many concert pieces. His chamber music includes four wind quintets, five saxophone quartets, and many works for solo instrument and piano. In addition, he has written a variety of orchestral and choral pieces.

David Maslanka’s compositions are published by Maslanka Press, Carl Fischer, Kjos Music, Marimba Productions, and OU Percussion Press. They have been recorded on Albany, Reference Recordings, BIS (Sweden), Naxos, Cambria, CRI, Mark, Novisse, AUR, Cafua (Japan), Brain Music (Japan), Barking Dog, and Klavier labels. He has served on the faculties of the State University of New York at Geneseo, Sarah Lawrence College, New York University, and Kingsborough Community College of the City University of New York, and since 1990 has been a freelance composer. He now lives in Missoula, Montana. David Maslanka is a member of ASCAP. 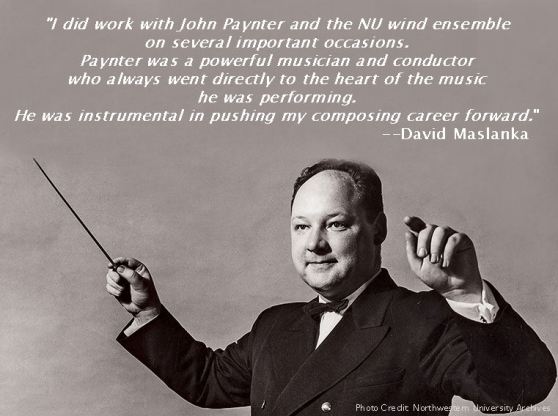 A special thank you to Mr. Maslanka for generously offering us his thoughts on his two beautiful works and for giving permission to reproduce this material.  Please visit his website at www.davidmaslanka.com to learn more about this American composer.

Giving Voice to the Silenced

The Northshore Concert Band is honored to welcome Gene Pokorny, Principal Tuba of the Chicago Symphony Orchestra, for his first solo performance with NCB!

The program, entitled Reflections, is on Sunday, November 6, 2016 at 3:00 pm at Pick-Staiger Concert Hall, Northwestern University in Evanston, Illinois and is conducted by Artistic Director Mallory Thompson.

This concert opens our season of musical “Reflections” with a diverse program that embraces a world of freedom and fellowship. The concert’s driving opener, Magnolia Star, is a jazz and blues-inspired work by emerging American composer Steve Danyew that celebrates the Illinois Central Railroad and the symbolic way that its route brought art together in America.Reflections concludes with two contrasting works by Dmitri Shostakovich that commemorate the October Revolution of 1917. His familiar and celebratory Festive Overture was written and premiered in just three days in 1954. October, the composer’s only tone poem, was written in 1967 and depicts the struggle and triumph of humanity throughout history.  Program highlights featuring Mr. Pokorny  will include Turbulence by Bruce Broughton and Over the Rainbow by Harold Arlen, arranged by  Alan Morrison and transcribed by Joseph Kreines.

Gene Pokorny has been the tuba player in the Chicago Symphony since 1989.  Previously, he was tuba player in the Israel Philharmonic, the Utah Symphony, the St. Louis Symphony and the Los Angeles Philharmonic. In addition to playing film scores in Hollywood such as Jurassic Park and The Fugitive, he has played in chamber music, opera orchestras and orchestra festivals worldwide. He grew up in Downey, California, about a mile from where the Apollo command modules that first took man to the moon were built. He studied tuba in Southern California with Jeffrey Reynolds, Larry Johansen, Tommy Johnson and Roger Bobo.  In recent years, he has annually returned to Southern California teaching, playing and lecturing at the Pokorny Seminar given at the University of Redlands.  He assisted Rolling Stones’ trombonist, Michael Davis, in the production of his “Twenty Minute Warm-Up” along with having solo and educational CDs of his own. He has received an Outstanding Alumnus Award and an Honorary Doctorate from the University of Southern California and University of Redlands, respectively. Pokorny is a member of the Union Pacific (Railroad) Historical Society and spends time as a “foamer” (watching and chasing trains). He is a card-carrying member of The Three Stooges Fan Club (a “victim of soicumstances!”) and is an avid enthusiast of his good friend David “Red” Lehr, the greatest Dixieland sousaphonist in the known universe. Gene, his wife Beth Lodal (the one in the family with a three-digit IQ) and their basset hounds, (nonmusicians who happen to have real lives), regularly forage from their refrigerator, which is located in the Edgewater neighborhood of Chicago.  (Biography courtesy of the Chicago Symphony Orchestra )