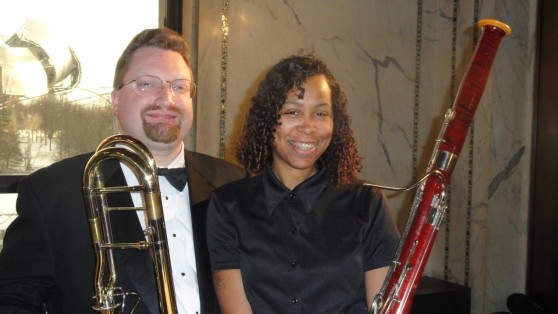 Daniel DiCesare plays the Trombone and has been with the Northshore Concert Band since 2013. He is a Private Music Teacher and lives in Chicago, Illinois.

When and why did you start playing?  Both my father and grandfather were amateur jazz drummers, so I joined the fifth grade band because I wanted to be a drummer like them. Of course, I hadn’t told anyone that’s why I was joining, otherwise someone might have warned me that grade school concert bands don’t play jazz. But I stuck with it anyway, and got steered toward playing tuba. I picked up trombone in high school, so that I could join the jazz program there, thus it all worked out in the end.

What do you enjoy most about playing?  I’m creating something beautiful, and that always feels special to me.

Do you have a favorite musical memory? Performing with Quincy Jones and his hand-picked guest soloists at the Montreux Jazz Festival.

What are your musical influences?  Too many to list! Ranging from the rock group The Who to Renaissance music.

Who was your most influential music teacher?  Jim Warrick, my high school jazz director. He always seemed to be having so much fun! But working with him wasn’t just goofing around (although there was plenty of that,) it was him showing us that working hard at something, and constantly looking to improve at it, made it more fun, not less.

Does anyone in your family play music?  My wife plays bassoon, and my father plays drum set and vibes.

What’s on your iPod?  About a dozen obscure jazz albums, highlighted by The Complete Aladdin Sessions of Lester Young.

Do you have any advice for young musicians? Listen to as much music as you can, of as wide a variety as you can. Listen, and imitate what you hear, because that’s where it all began.

What makes performing with Northshore Concert Band different than performing with other groups?  It’s an amateur group with a professional atmosphere. I like that fact that the standards are very high even though the stakes are low. I’ve played professionally for years, but still feel like I have to bring my best stuff every Wednesday night so I don’t let my friends down.

Please add anything else that you would like our audience to know about you.   I teach lessons to students of all ages at reasonable rates. 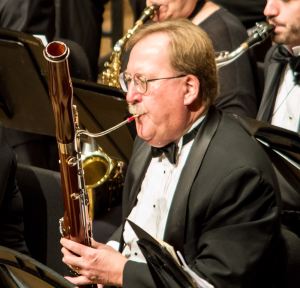 Steve Moline plays the Bassoon and has been with the Northshore Concert Band since 1981. He is a retired Music Teacher and lives in Naperville, Illinois.

When and why did you start playing? I’ve basically started playing since I was in Kindergarten. Not on bassoon! But I’ve loved Music my whole life.

What do you enjoy most about playing?  I love the relationship between instruments, sections, the whole ensemble.

Do you have a favorite musical memory?  When I was young, I would always ask my Mother if you heard my bassoon during the concert. She would always say yes…but I know she really didn’t. But it always made me feel proud.

What are your musical influences? Mozart

Who was your most influential music teacher? My High School Band Director, Henry Pinter. I really loved him.

Does anyone in your family play music? My Mother played clarinet, my Father played piano. (only on the black keys)

What’s on your iPod? I don’t own an iPod. I listen to WDCB and WFMT. (during dinner)

Do you have any advice for young musicians? HAVE FUN!

Please add anything else that you would like our readers to know about you.  When looking at the Bassoon section, look for the blond-headed guy!

Learn more about the Northshore Concert Band at www.northshoreband.org