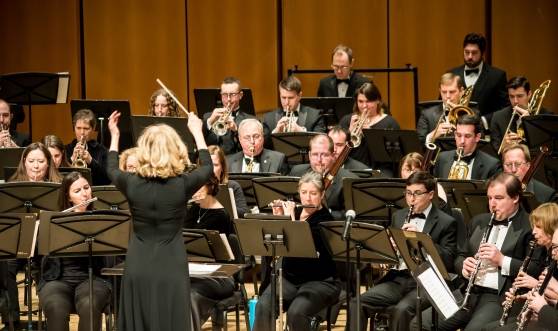 Highlights include a specially constructed and memorable “Remembrance Suite” that includes John Williams’ dramatic Theme from Schindler’s List, Jack Stamps’ Scenes from Terezin which is based on the poems of Ava Scholsova and Fronta Bas, both of whom died in the Auschwitz concentration camp, and Francis McBeths’ beautiful and intense Kaddish. Also included is Lawrence Siegels’ Kaddish Suite which honors the survivors of the Holocaust and rejoices in their spirit. The Houston Examiner describes Kaddish Suite as a “Sweet, shocking, melancholy, uplifting, horrific, and finally, powerfully triumphant.”

Music is wonderful. It lets us tell ourselves things we can’t speak out in words. It opens the dream space and lets us dream together. It lets us imagine the world as it really is, a place of vitality, power, and possibility.

We live in fear of destruction, from climate change, nuclear bombs, increasing population, vanishing resources, continuous war. When the troubles are listed like this it is hard to know what we think we are doing with our seemingly simple and innocent music making.

Individual concert tickets are $20 each, seniors $15, students/children $10.
Tickets are available in advance or at the box office on the day of the concert.

The box office opens at 2:00 pm on the day of the concert.

Bring A Group Of 10 Or More And Save!

All of our concerts are at Pick-Staiger Concert Hall on the Northwestern University Campus in Evanston, Illinois.  It offers outstanding acoustics, easy-access drop-off and pick-up for cars and buses as well as 16 wheelchair accessible seats.